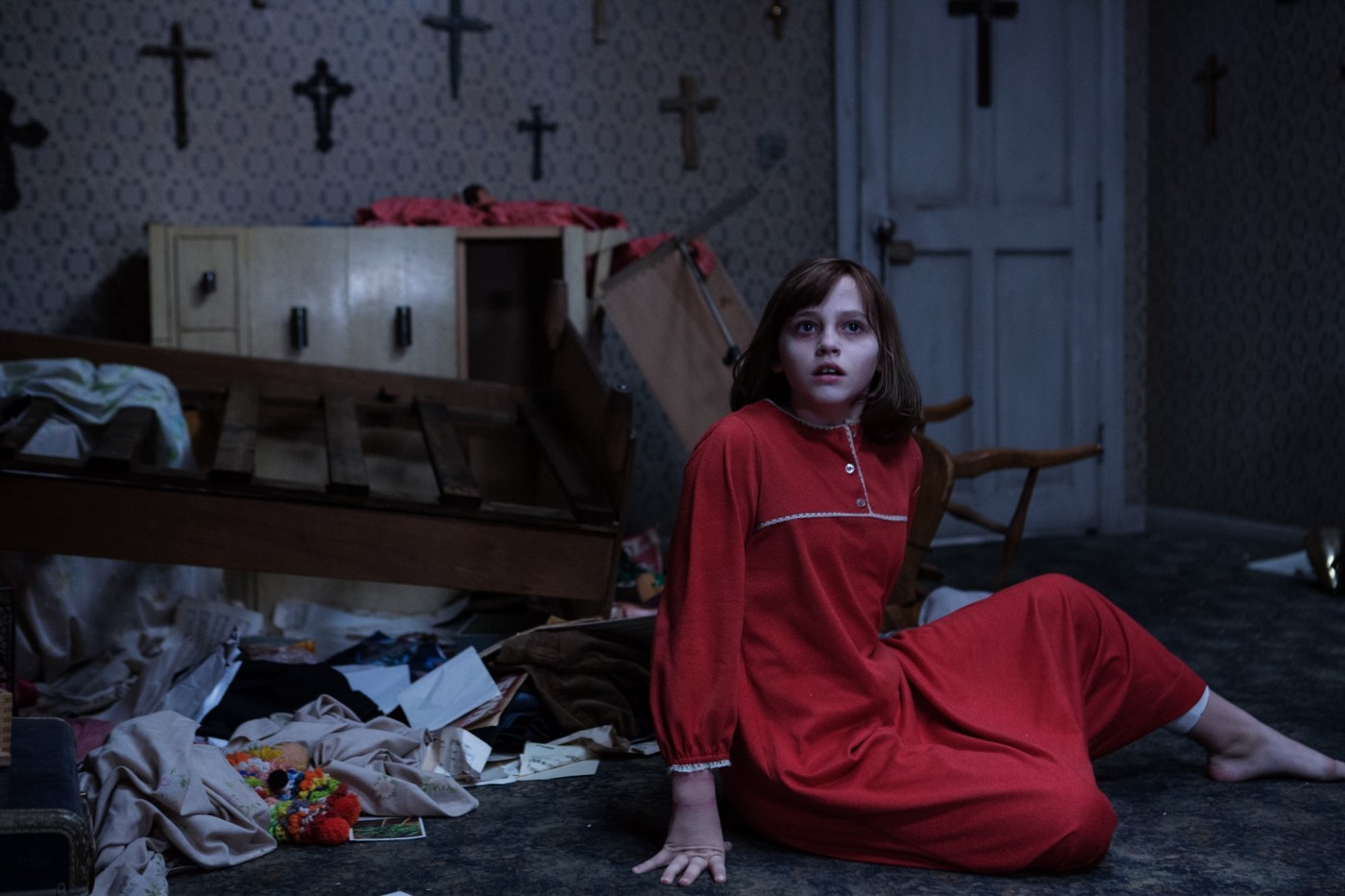 It starts small. An unexplained noise. A bodiless whisper. An object moves on its own. A shadowy figure out of the corner of your eye, behind you, under the bed. There’s something wrong in your home; something evil is here, something inescapable, powerful, and it wants to kill you.

Director James Wan knows how to make movies scary. Not just the overused jumpscares-and-extreme-gore model populating most modern attempts at the genre, but a genuine chill up your spine, sleep with the lights on, burns itself onto your psyche, frightening. He’s built his career on this keen knack for establishing tension, never with more skill than in 2013’s surprise hit The Conjuring, one of the smartest horror films of the last decade. Its sequel, The Conjuring 2, follows many of the same style and story beats — maybe too many. But if the formula worked the first time and works here, and is a hundred cuts above all other big budget horror movies, why complain?

The Conjuring 2 picks up after the events of its predecessor, specifically during a seance at a very famous house in Long Island with very famous windows. After experiencing a disturbing vision, married couple Ed and Lorraine Warren decide for their own safety it’s time to back away from their roles as paranormal investigators. But of course it’s not long until the Catholic Church sends them to the small home of the Hodgson family in Enfield, England (to the tune of The Clash’s “London Calling,” of course). The family claims they’re terrorized by vengeful supernatural forces, specifically their 11-year-old daughter, Janet, who’s a victim of demonic possession.

The real life story the movie’s based on, the Enfield Poltergeist, is one of the most documented and publicized cases of supposed paranormal activity in the last fifty years; think of it as England’s version of Amityville, if the name doesn’t ring any bells. Just like Amityville, it’s been pretty adequately debunked as a hoax, which the film doesn’t hesitate to addresses — how much of what the Warrens investigate is actually real? Are they fame-seekers exaggerating their experiences, or misunderstood people steadfastly loyal to their convictions? Are they being manipulated by little girls desperate enough for attention, they’d fake a haunting?

The Conjuring 2 isn’t a movie concerned with whether these events happened in real life, though— the point is it’s here to scare you, and scare you damn good, with classic, practical techniques. Wan crafts his scares by following in the footsteps of his influences: Stanley Kubrick, John Carpenter, Poltergeist and The Exorcist. Atmosphere and restraint are his weapons of choice— he lets seemingly harmless events, like a toy fire truck rolling down the hallway, escalate in severity until they cumulate into suffocating dread, with scenes playing out to torturous, exhausting lengths. The combined use of chiaroscuro lighting and an always-moving camera showcases Hitchcockian panache in raising suspense; you never know what might be lurking in the dark because your perception’s limited to only what he chooses to show you. A close-up of hands reaching for a flashlight, a frightened face — the camera pans away, and when it comes back, everything’s changed. You know something’s lurking just out of sight, and you’re waiting, helpless, until it strikes. Just because we’ve seen this same claustrophobic execution before doesn’t mean it’s less effective a second time. 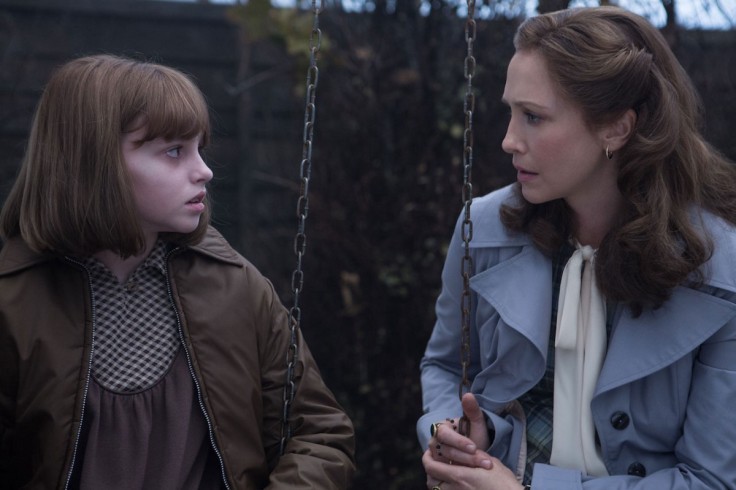 Two fantastic scenes in particular really show off Wan’s ingenuity: when Ed Warren is talking with a demonic entity, the camera keeps Warren in the close-up, focused foreground and the possessed girl in the blurred background, as she transforms into something monstrous we can’t quite make out. The other plays with perception and shadow by using a painting to play with what’s real and what isn’t, making the mundane questionable and truly horrifying. (Think the Captain Howdy face in nun’s clothes; holy shit.) He knows that the scariest thing is to let our imaginations take control, and to never cut away when you can just. Keep. Ratcheting up that unease. Wan’s not above going for the occasional jump-scare payoff, but they’re executed with such finesse that those instances feel earned instead of cheap, fresh and innovative instead of something we expect thanks to overexposure. A quick shot of adrenaline-filled relief before the real horror strikes up again.

The only scene that doesn’t work is the only one that involves heavy use of CGI; after exquisite build-up, the tension fizzles with the reveal it’s just another special effect, instead of a creature that’s just this side of believably tangible. It feels like a ripoff of The Babadook gone wrong or a William Castle stunt, especially with the Hammer Horror-esque* shrieking of strings, but it’s a small instance in an otherwise seamless roll call of nerve-shredding.

A bigger budget sequel means a bigger scope, so some of the first movie’s intimacy with character is lost in the shuffle. The victimized Enfield family isn’t as well-drawn or detailed as the Perrons. The actors deliver stellar performances, especially young Madison Wolfe as Janet, who’s equal turns sweet, shy, and terrifying (evoking deliberate flashbacks to Linda Blair in The Exorcist), but our familiarity with her and our care for the family’s situation doesn’t reach the same levels as Lili Taylor’s Carolyn Perron slowly being robbed of her soul. We don’t spend enough time getting to know them first. Where the first film was perfectly simple and utilized that as its defining strength (a haunted house in the middle of rural nowhere), this plot is a complicated riddle overarching between both films that doesn’t have enough breathing room before the sudden climatic payoff. Having said that, the script touches upon issues of class, poverty, and discrimination very deftly (a single mom raising four kids wasn’t nearly as acceptable back then), and the writers remember that what makes a truly successful horror film isn’t watching the excessive, exploitive torture of characters, but having an empathic investment in those characters as they endure hell on earth.

To keep us grounded the most in that investment are, still, Ed and Lorraine. They’re such perfect leads for this kind of film, a breath of fresh air — avenging angels combatting the supernatural, but compassionate, warm, brave people committed to helping others even at the risk of their own lives. They’re not perfect; they doubt, they fear, they have flaws. They’re real people, good people, about whom we care. No matter your views on religion, their faith in each other is as strong as their faith in God, and powerhouses Wilson and Farmiga never snicker at some of the sillier dialogue. The pair sell a scene of Ed impersonating Elvis with such commitment, it’s Oscar-worthy. (Any excuse to hear Patrick Wilson sing, amirite?) The Warrens’ conviction to doing what’s right sees the film through and helps keep the audience above water so we don’t drown in abject nihilism: everyone endures unspeakable horrors, but they all emerge safe and whole. That optimism verges on heavy-handed cheese toward the end, but it’s wonderfully refreshing in a genre where fetishized torture is the go-to norm instead of story. (Have I harped on that enough?) Love is the real power here, not demons.

Sequels are rarely as good as the first movie, especially when they’re bigger and longer, but the areas where The Conjuring 2 doesn’t quite measure up to its namesake are no big deal. It keeps everything that made the first film work — smarts, heart, great characters, and an innate understanding of what terrifies. Wan’s made another immensely satisfying installment in a franchise that I hope keeps finding new twists on the same ways of scaring me.

(*Can Patrick Wilson become our modern day Peter Cushing? Oh man, I’m so into that. Noble and handsome, born to wear waistcoats, and unnaturally good at shouldering open things! BREAK DOWN THAT DOOR, PATRICK!)