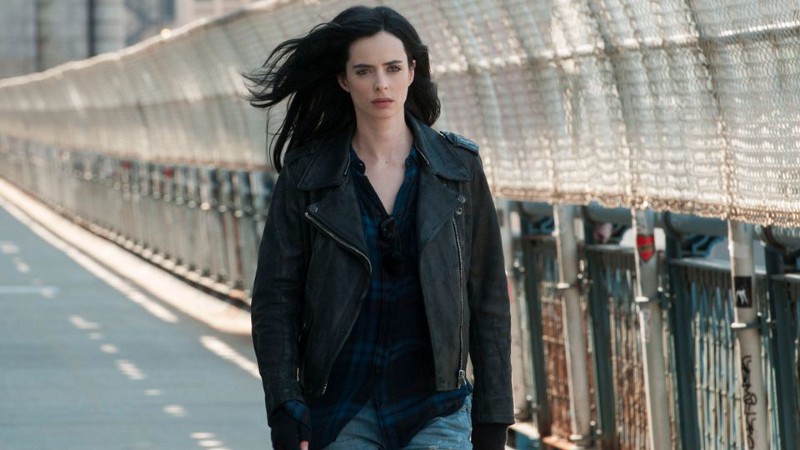 I’ve had two weeks to digest the latest effort from Marvel and Netflix’s collaboration. It might not be the best testament to my writing prowess, but I couldn’t talk about Jessica Jones right away. There was too much in my head to process. I have an embarrassing, overly emotional confession that will undoubtedly draw mockery from friends and strangers alike: when the credits rolled on the final episode, I watched them through a fountain of grateful tears.

Because Jessica Jones is a nigh-miracle.

An imperfect one, which I’ll get to later: but here is a female-created, female-driven narrative wholly centered around women regaining their autonomy, their bodies, and their futures; that treats sexual assault with the responsibility and gravitas it deserves rather than as a cheap plot device or the exploitive, disgusting, omnipresent trope it’s become; and it stars at its core a smart-ass, hard-drinking, emotionally shattered, deeply caring private investigator straight out of a classic film noir, who just happens to exist on the darker side of the colorful Avengers universe.

Given how even in 2015 our media landscape is so heavily skewed toward the male experience (especially considering we won’t see our first female headliner in the Marvel movie universe, Captain Marvel, until 2018, and the constant sidelining of Black Widow as a character), for a show one hundred percent devoted to the female perspective to not only exist, but be successful, is a revelation.

I’ll admit there’s a bias on my part. Alias, the comic series by Brian Michael Bendis and Michael Gaydos from which Jessica Jones creatively springboards, has been my favorite since I encountered it ten years ago. But given that history, there was both a monumental personal and thematic bar for the series to live up to, and countless areas it could fall apart.

Not only does it wildly succeed as a powerful, haunting piece of psychological examination, it outdoes every other superhero effort for emotional impact, feminist empowerment, and sheer cinematic quality. Like its predecessor Daredevil, it’s impossible to brush it off as “just another comic book show.” (Which is no slight to the more traditional “comic book shows” currently airing; I love Arrow and Supergirl and will go to the mat for them.) Jones is a triumphant achievement of the small screen medium, standing on equal ground, and in some areas, head and shoulders above any of its network counterparts. It’s television at its boldest, most compelling, and most soulful.

The film noir cliches are all there in the haunted, hardboiled detective, the tough-talking dame, and the shadowy shots of New York sidewalks reminiscent of Taxi Driver, but as with all great genre fiction the fantastical setting serves as an enjoyable backdrop on which to present a desperately human tale: the aftermath of trauma and overcoming abuse. Jessica Jones was raped by the show’s villain Zebediah Kilgrave (David Tennant in a can’t-be-praised-enough performance), in addition to her many months of emotional slavery to Kilgrave’s whims. There’s no mincing words, no hiding in semantics. Only the truth: any kind of sex that is coerced, unwanted, and without consent, under any circumstances, no matter the supposed intention of the perpetrator, is rape. Kilgrave’s crime is not global domination but claiming ownership over others’ bodies, especially womens’, as if they are his to control.

Sexual assault in media has been reduced to a shocker gotcha moment to supposedly show just how far a series will go with its so-called “gritty, realistic darkness.” Even more insulting is it’s mainly used to force the man into action (he’s so upset at the rape and murder of his wife, he’s out for revenge!), or as an exploitive way to invent dramatic stakes for a female character when writers can’t concoct any other story to tell for women except subjugation and suffering. (Game of Thrones in general, but especially the despicable rape of Sansa.) Worst of all, the victim’s experience is glossed over and we move on to the next episode as if nothing happened. There’s rarely meaningful aftermath, or even an acknowledgement from the survivor’s point of view of the horrors endured, and I’m terrified the act and its ramifications have been diminished in the minds of the viewing public. Oh, rape, seen it before, big deal. That’s not only terrifyingly dangerous thinking, but utterly intolerable.

Jessica Jones succeeds because it’s rooted in truth. Victims are scarred with PTSD. They form support groups. They talk about it openly from the first episode, never shying from harsh reality. A woman aborts a fetus from her rape, and there’s an astonishing lack of either indecision or judgment. Jessica teaches a fellow survivor to repeat, “It’s not my fault. None of this is my fault.” In fact, victim blaming only comes from one source — the mouth of Kilgrave himself, attempting to justify his actions with the rhetoric of well, you know you really wanted it. Doesn’t that sound familiar?

Besides his powers, there’s nothing extraordinary about Kilgrave. He’s every horrible man with privilege granted unlimited power, and for that he’s one of the scariest, most effective antagonists put to screen. There’s also no chance of redemption, no quarter given of forgiveness. Kilgrave’s attempt to shuck off personal responsibility and lay his amorality at the feet of bad parenting is deconstructed as a lie. A self-deluded, manipulative lie, the same as his constant gaslighting assertions that Jessica is ungrateful, selfish, and bitchy for rejecting his affections. He’s more than just a cackling comics villain — he’s the abusive boyfriend. He’s the stranger who shouts harassment on the street. He’s the handsome charmer you’d never suspect capable of such cruelty. He’s the Gamergates of the world.

All of which can be summed up in the series’ crowning moment of brilliance: “Smile.”

How many women have been commanded to smile in our lifetimes? How many of us have had our appearance criticized as not pleasing enough by a strange man, or someone we know? The first time a brainwashed Kilgrave victim told Jessica to “smile,” I shuddered. That acknowledgment of female fear, the calling out of systematic patriarchy, went to my bones.

All in one it’s the most realistic depiction of trauma, the damages of toxic masculinity, and the path to healing, I’ve ever seen.

Perhaps this proves that women writing women results in an altogether too rare phenomena: female characters as real, fleshed out human beings with satisfying emotional journeys. Not only does the series recognize their pain and condemn any romanticized sympathy for Kilgrave, there exist subtleties and nuance in their actions, nobility and selfishness and the grace notes in between. There’s not only Jessica but her best friend Trish Walker, former child star turned radio talk show host with a heartfelt desire to save the world, and a history marked by an abusive mother. Carrie Ann Moss is sublime as Jeri Hogarth, a sharp-clawed lawyer in the middle of a devastating divorce and an affair with her younger assistant.

As for Jessica herself, she isn’t pretty. She’s self-destructive, emotionally isolated, and doesn’t cope well. She’s the antithesis of Tony Stark, a similiar snarky one-liner with a drinking/attitude problem, in that her flaws aren’t glamorized. But neither is she demonized. Beneath the raw wounds and broken pieces, even at her lowest moment, Jessica’s overriding desire is to help people. She doesn’t have a magical hammer or a savvy suit of armor, only her fists, wits, and determination. Despite her justified fear of Kilgrave, she overcomes that fear to protect. And that’s the greatest heroism of all.

As mentioned, there are flaws. Flushing out Kilgrave to stretch across thirteen episodes results in an unsettling narrative fixation on him. There’s too much time devoted to side characters who bring little to the tableau, like the twins and Will Simpson, who just seemed to exist as a set-up for his future as Nuke. Even with the wonderful Luke Cage and Malcolm Ducasse, characters of color are few and far between and the ones present are either romanced, heartbroken, or saved by the white female. Or, in the case of Reva Connors, our most primary WOC, killed in flashback. I’d have liked to see more of Jessica’s hero days and a deeper focus on her recovery, rather than the extended emphasis on pain, but I have hope if season two happens. The final episode brings her the beginnings of peace, if more from the outside than inward.

Having said all that, you might think this is a depressive series to consume. While it’s a difficult, unforgiving watch, it ignores the cliches commonly associated with the dark n’ gritty subset. It’s never bleak for bleakness’s sake. Aesthetically they remember daylight exists in New York City, and thematically the same strain of optimism seen in the rest of Marvel’s properties runs throughout. People keep fighting and helping, even when it seems fruitless. There’s always hard-won hope: for happiness, for healing, for family, and for a tortured woman to reclaim her life.